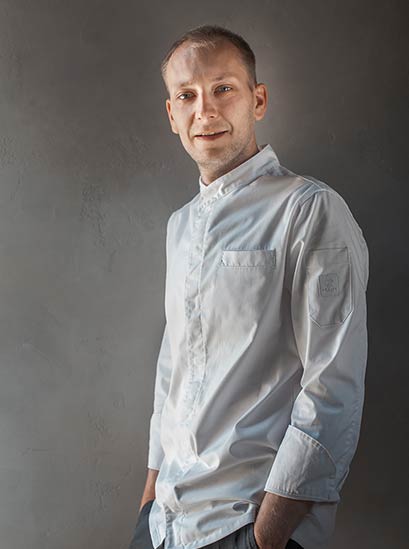 Brand Chef and Lecturer at SVCH.

Graduated from MTK as Technician-Catering Technologist. In a professional kitchen since 1999. He spent nine years working with Fabrizio Fatucci, going all the way to the Sous chef of the Sculptors and Gusto restaurants! At the same time he was the chef of two restaurants in the scientific project “Bernia”. Anton Isakov studied and taught in the direction of «Living Kitchen» by Professor Antonio Meneghetti. Then he was the chef of the first restaurant in the ITALY Group, a year later he took the position of the Conceptual Brand of the company.

Since 2013, he worked at the GINZA Project, where he held the position of Creative Brand chef. He developed the menu and organized the work of the kitchen on projects within the SPIEF and VeryVIP at the Confederations Cup. He worked with various specialists from different countries such as Yoji Tokuyoshi, Giuseppe Iannotti, Tim Butler, Mario Sandoval. Every year attends the world gastronomic congress of Madrid Fusion. He knows everything about dishes of the new Russian cuisine, is also a virtuoso of author’s cuisine and creative serving of dishes. It implements the idea of ​​Russian cuisine through working with the product and using the latest gastronomic technologies. Consists in the coaching staff of WorldSkillsRussia.

Each dish of Anton Isakov has his own style and philosophy.