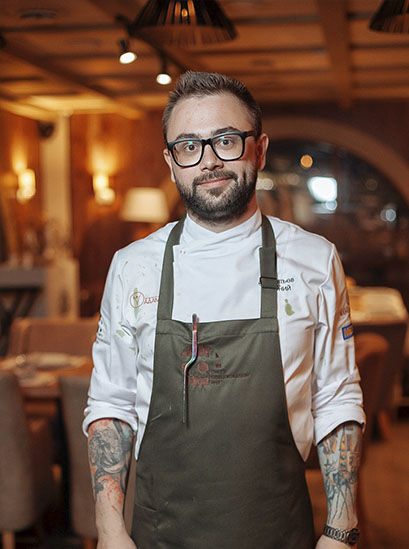 Having worked in the best restaurants of St. Petersburg: Il Palazzo and La Maree,

After Eugene stayed in Italy for an internship in a restaurant with one Michelin star.

Returning to St. Petersburg, he opened a project “Wine Cabinet” on Rubinstein in St. Petersburg with his friends, then the Hamlet + Jacks restaurant.

Vikentievs art of gastronomy creates, as a rule, its own reality, expressed in the language of taste combinations.

For five years as a chef, and even in several projects in parallel, Eugene created more than 300 dishes.

When the cultural capital of Russia finally turned into a gastronomic one, Eugene began to live in two countries, opening the CELL restaurant in Charlottenburg.

Evgeny Vikentiev is a real rock star of the Russian gastro scene, continues to tour.

Festivals, pop-up dinners, new ingredients and discoveries of tastes are something without which he does not see his life.