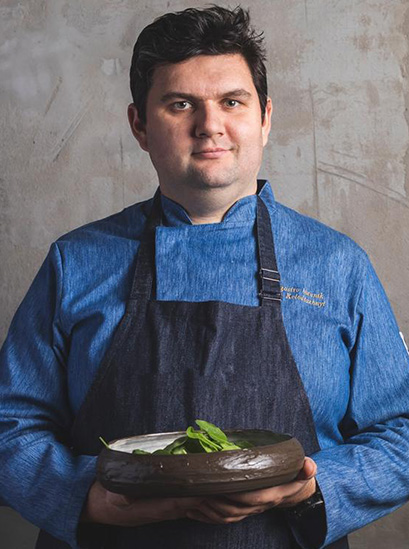 Chef of the BLUSH wine bar, studying Russian wild plants together with the Russian Academy of Sciences, giving lectures at MGIMO.

Founder of Gastrobotany in Russia.

In 2011, he took 2nd place of the first All-Russian team championship of Russia. He was also awarded a medal as an honorary citizen of Pyatigorsk on the 230th anniversary of the city.

Member of the North Caucasian Culinary Association since 2007.

Member of the Federation of Professional Chefs and Confectioners of Russia Since 2009.

At the very beginning of his work, being an ordinary cook and not suspecting the existence of the “gastrobotany” trend, Andrey Kolodyazhny was intuitively interested in using wild herbs and plants in cooking. At the age of 26, having graduated with a degree in industrial engineering as a food service engineer, Andrey becomes the chef of a restaurant in the city of Pyatigorsk and takes up experiments. Using the principles of molecular cuisine, Andrey adds unexpected dishes and ingredients to the menu.

A real revolution in Andrey’s mind occurred after visiting the Madrid Fusion exhibition and exploring the works of chef Rodrigo de la Calle, whose restaurant was twice featured in the Michelin Red Guide. He realized that he was not alone in his quest and was doing the same thing as cooks in other countries of the world. Immediately after the exhibition, Andrey went to Denmark to get acquainted with the Scandinavian cuisine, which, like gastrobotany, is based on the principles of seasonality, locality and rationality. Having mastered new techniques and adopting ideas, the chef continued to work with non-standard products.

An important role in the development of Andrey as a professional gastrobotanist was played by his experience in the city of Sochi. It was there that he was able to realize the potential accumulated over the years: in 2012, Andrey Kolodyazhny became the chef of the largest Brad-Pit beer restaurant in Krasnodar, and in 2014, the chef of the Druzhba restaurant in Krasnaya Polyana, which served the 2014 Olympic Games From 2015 to 2017, Andrey worked as a brand chef at Baran-Rapan and Fettuccine restaurants, where he gained all-Russian fame thanks to an innovative approach and constant scrupulousness in his work. For about two years, Andrey worked as a brand chef of the restaurant group MODUS (restaurants MODUS Moscow, Baikal (Sochi), MODUS (Sochi).